I and my husband are living in Groningen, the northern-most city in the Netherlands. It is far from other big cities in the Netherlands, such as Amsterdam and The Hague. If we say to our friends “Please come and visit us in Groningen”, most of them will reply “I want to, but Groningen really is far..” Yeah! But Allah has an infinite justice, God locates a halal restaurant serves the best spare ribs in Groningen (lebay ya?) It becomes an attractive thing that make people visit Groningen.

I am not merely saying that Babylon has the best spare ribs in Groningen. I dare to write it down because many people say that. I have a friend from Wageningen who has tried some places serve halal spare ribs in the Netherlands and she finally came to Groningen to taste Babylon’s spare ribs. After she tried it, she told me that this ribs was the most delicious compared to others in Amsterdam and other cities. 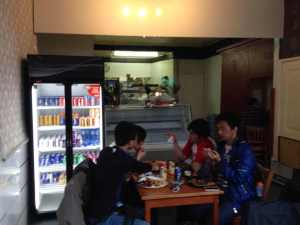 My husband ever came to Babylon twice before I came to Groningen and I went there three times without him because he was in Indonesia. Then, we finally went there together and ate the spare ribs last month. So, I think this is the right time to share our experience in tasting the spare ribs in Babylon. Ah ya, when we came to Babylon at that time, almost seats were occupied by guests who came from The Hague. They are Indonesian students who are studying in The Hague and stopped by in Babylon Groningen after visited Giethoorn. I think it really is true that Babylon is very famous, especially within Indonesian community in the Netherlands.

As you can see in the picture below, the place is very modest. There are 4 square table with 4-6 chairs in each table. My favorite place is in close to the window, because I can see people walk or ride bikes outside. There is one rectangular table functioned as an receptionist table. Behind that, there is a big grill where the spare ribs are grilled. In the very back of the place, there is a small enough kitchen.

At that time, as usual, we ordered a portion of spare ribs for us. We shared a portion because the spare ribs portion is very large for Indonesian. Maybe that is a normal size for Dutch people. We were waiting for almost 25 minutes, quite long time, right? Eventually our spare ribs came to our table. We got a plate contained 3 big pieces of ribs and mixing of vegetables and fruit (lettuce, sweet corn, tomato, cucumber, and pineapple) and a plate full of fried fries. We also got garlic sauce for the fried fries.

The ribs was very delicious. It was sweet and also savory. So far, the spices that I could identify on my mouth were honey, sweet soy sauce, pepper, nutmeg, salt, and… no idea. Haha! It was just delicious in my mind. The meat was so tender, eventhough it still attached to the bone. I meant that was not loose from the bone by itself because the meat was very tender. And the best thing (for me) is I did not feel nauseated when I ate the part of meat contained a thick fat. So I ate a whole part, without some parts left. My husband knew that I will not eat fat part in meat and give that part to him. Thanks God, he really liked that part!

So, that is all our experience in tasting the best spare ribs in the Netherlands. Indeed, this dish was savory enough for Indonesian who lives in the Netherlands or other countries, outside Indonesia. But frankly speaking, this dish still cannot beat the delicacy of ribs in Indonesian, such as Iga Bakar si Jangkung and Kambing Bakar Kairo (both of them are located in Bandung, Indonesia). Oh ya, the last thing is we usually eat Babylon’s ribs using hands, instead of using fork and knife. Maybe because it is our nature as an Indonesian.